The Austrian Academy of Sciences' Commission for GIScience annually selects the winner of a 'Young Researcher' competition, based on an outstanding publication submitted by applicants enhancing the body of literature in Geoinformatics and GIScience. This year's review-and-selection process started from a significant number of excellent entries, with two applicants tied for the win:


Franz-Benjamin Mocnik from the Faculty of Geo-Information Science and Earth Observation, University of Twente was selected by the committee based on the merits of his paper: 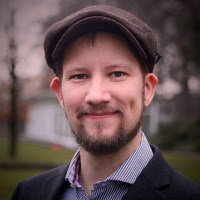 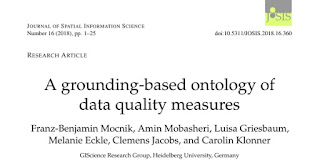 An equal rank goes to Yingjie Hu from the Department of Geography at the University at Buffalo for this paper: 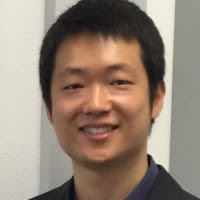 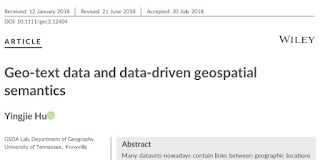 Congratulations to the winners for this recognition of outstanding contributions to GIScience! We anticipate a next call for applications to be published in fall 2020.

May 8: Lecture by Prof Michael Batty at ÖAW


The analysis of spatial relationships between the location of different activities and land uses in cities is key to our understanding of how cities function. We live in an era when cities are no longer regarded as places where congestion, pollution and poor quality of life are their main characteristics but where cities are lauded for the environments they provide for diversity and innovation which are the engines of prosperity in the modern economy. In this talk, I will sketch what we have learnt about the city during the last 150 years introducing the notion that cities are complex systems that are continually evolving, always in disequilibrium, and getting ever more complex as societies get wealthier and we move headlong into the information age. Despite that fact that we have many different kinds of analysis and model which aspire to understand different elements of the city, cities are evolving faster than we are able to develop new theory in their explanation prior to any thinking about their future. We will thus sketch the key models involved and the dilemmas that they pose for our better understanding of urban phenomena. To illustrate these ideas, we will outline our ambitious attempt to model all cities in Great Britain at the same spatial levels we have previously been doing for individual cities. We will explain why we have developed a web-based resource rather than a model where the analysis and simulation is on the desktop. This introduces the idea that to understand and plan the future city we need to provide tools that enable as many stakeholders as possible to be involved. We achieve this by developing models that are available anywhere a user has a web connection, thus providing a tool that any stakeholder can use to test a planning scenario whose impact can be anywhere within the nation. We have developed the model for Great Britain because of the need to look at such national impacts, particularly of new infrastructure projects, thus attempting to simulate as many interactions as possible. The model is called QUANT (Quantitative Urban ANalytics forecasting) and is available at http://quant.casa.ucl.ac.uk/).

The Austrian Academy of Sciences' Commission for GIScience annually selects the winner of a 'Young Researcher' competition, based on an outstanding publication submitted by applicants. This year's review-and-selection process started from a historically high number of excellent entries, with two applicants tied for first place. 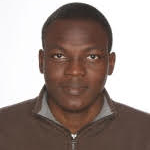 Auriol Degbelo currently is a research associate in the 'Situated Computing and Interaction Lab', Institute for Geoinformatics, University of Münster. This paper highlights a new approach to formalize spatial and temporal resolution of sensor observations that have been described with an ontology. The theory is highly influential as it might change the way we think of resolution – especially in the age of Volunteered Geographic Information. 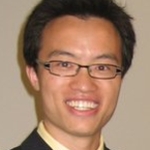 An equal first prize goes to Wei Luo for his paper co-authored with Alan M. MacEachren: "Geo-social visual analytics" in JOSIS, No 8 (2014).

Wei Luo has been a Postdoctoral Research Assistant in the The Spatial Analysis Research Center (SPARC), School of Geographical Sciences & Urban Planning at Arizona State University and now is a Research Associate at the Boston Children's Hospital Computational Health Informatics Program (CHIP) and Harvard Medical School. The paper of Wei Luo and Alan MacEachren highlights a novel approach that goes beyond current geo-visual analytics, and succeeds in discussing an approach that integrates both the geographical and social (network) distance in visual analytics.
Posted by JStrobl at 02:44 No comments: 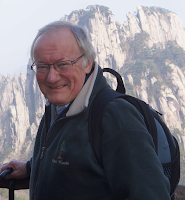 After being selected as 2018 recipient of the Austrian Academy of Science Waldo-Tobler 'Young Researcher Award', Pablo Cabrera Barona on Nov 16 received the award certificate during the Foromundo UNIGIS conference in Quito, Ecuador.

Pablo Cabrera Barona had completed his PhD in 2017 at the University of Salzburg with a thesis on "A Multidisciplinary Spatial Framework for Health Inequalities Analysis with Emphasis on Deprivation and Healthcare Accessibility" and currently is working as a researcher and academic teacher at the Universidad San Francisco de Quito (USFQ) and the Instituto de Altos Estudios Nacionales, Quito in public health, statistics and public policy as well as planning.

Congratulations, and best wishes for a successful academic career addressing the timely theme of 'Quality of Life' at the intersections of Geography, Ecology, Public Policy and Health!

On Oct 3, Prof Mitasova was received at the Austrian Academy of Sciences to deliver the annual Waldo-Tobler lecture, titled "Dynamic Surfaces and Geospatial Processes" - this distinguished honour has been awarded to her as the winner of this year's Waldo-Tobler GIScience Prize - Congratulations!

The audience was left impressed by the visionary combination of innovative spatial analysis and geovisualization methods, thanking Prof Mitasova for numerous contributions to the discipline of Geoinformatics, entirely available under open source frameworks.

Nomination letters for the 2019 Waldo Tobler GIScience Prize already can be sent to application@oeaw.ac.at, no later than October 31, 2018. Candidates shall be introduced with a cover letter justifying the nomination, a full scientific CV and list of publications.
Posted by JStrobl at 14:29 No comments:

The Austrian Academy of Sciences Press is granting Open Access to all reviewed GI_Forum 2018 articles through its GI_Forum Journal.

GI_Forum Journal publishes high quality original research across the transdisciplinary field of Geographic Information Science (GIScience). The journal provides a platform for dialogue among GI-Scientists and educators, technologists and critical thinkers in an ongoing effort to advance the field and ultimately contribute to the creation of an informed GISociety.

This publication is included in Thomson Reuters Conference Proceedings Citation Index which can be accessed via the Web of Science™ and Web of Knowledge™.

The GI_Forum 2019 Symposium is scheduled for July 2-5, with papers invited for submission under http://www.gi-forum.org/call!
Posted by JStrobl at 14:14 No comments: