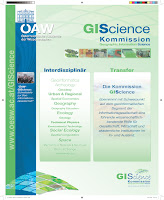 Email ThisBlogThis!Share to TwitterShare to FacebookShare to Pinterest
Labels: GIScience@ÖAW

In dialect geography various methods are used for systematically collecting evidence for dialect differences. De Vriends book with the same title contains five studies on tools and infrastructure for computational analyses of dialect geography data. In his talk talk he will discuss two of these studies in more detail.
The first study is on a unified structure for different sets of dialect dictionary data. The second study is on visualization as a research tool for dialect geography using a geo-browser. He will also discuss challenges related to implementing several of the results of these studies and he will illustrate these challenges with examples taken from the CLARIN (Common Language Resources and Technologies Infrastructure) projects he has worked on.
Folkert de Vriend studied General Linguistics at the Radboud University in Nijmegen. After obtaining his degree he worked on several projects at the Radboud University and the Meertens Institute in Amsterdam, aimed at digitization and curation of language resources and the development of tools for eHumanities research. In 2012 he obtained his doctorate at the Radboud
University on his PhD thesis “Tools for Computational Analyses of Dialect Geography Data”. Currently, Folkert de Vriend works on the preparation and implementation of Dutch-Flemish language policies at the Dutch Language Union in The Hague.